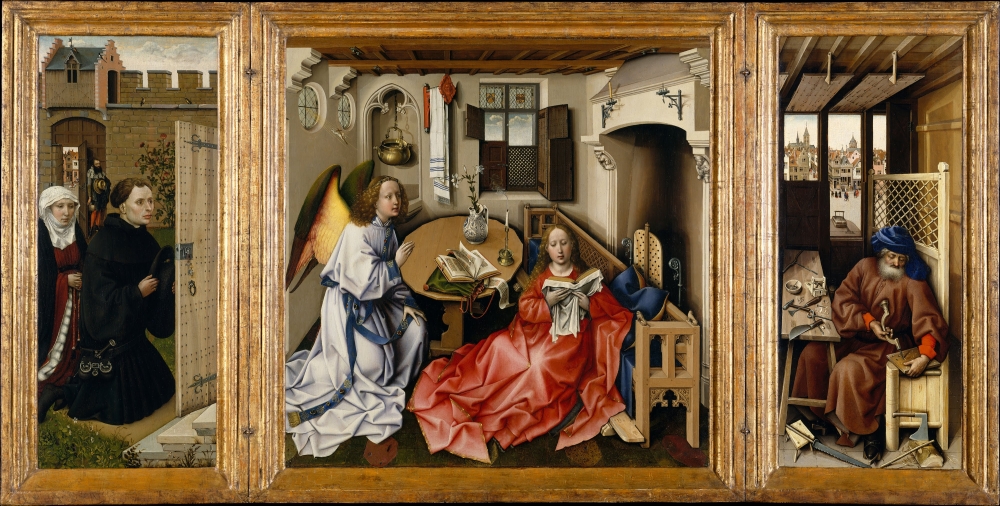 The Merode Altarpiece is a beautiful, richly symbolic Flemish triptych probably painted by Robert Campin and assistants in the 1420s on a commission from the Engelbrecht family. The name “Engelbrecht” means “brought by an angel,” which would have naturally suggested the annunciation as subject matter. The work measures about 4’x2′ and was intended for home devotional use. It’s currently housed at the Cloisters in New York.

In the left panel, we see the donors, peering through the door into the room of the Blessed Mother. The peculiar servant in the back seems to have been added later.

At the center is the Blessed Mother with breviary in the moment just before she notices the angel. A book and a scroll are open on the table: the New and Old Testaments, with the New atop the Old. She’s sitting on the ground in a gesture of humility, but resting on a bench marked with lions, suggesting a throne and thus signifying her Queenship. The lilies symbolize her purity and the cloths with blue stripes may be meant to suggest a tallit. 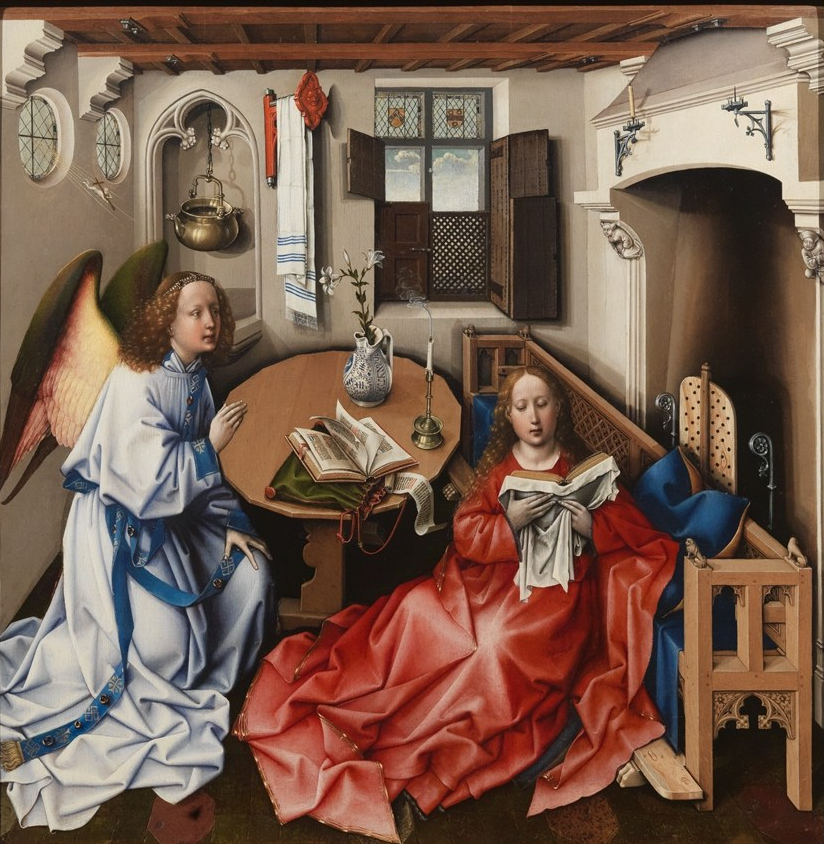 The scene is notable for the absence of any typical symbolism of the Holy Spirit, such as a dove. Instead, we have an unusual little sprite flying downward on a beam of light holding a cross. The soul of Christ?

Is the recently extinguished candle a sign that the light of the Holy Spirit is already on the move? And why is one candle missing from the mantle?

The right panel is even more interesting. It shows St. Joseph at his workbench, and his presence in this domestic scene is unusual.

It’s hard to tell just what Joseph is doing, but since a completed mousetrap is on the table, he may be working on another. This is almost certainly a reference to a theme Augustine used: Muscipula diaboli, crux domini–The Lord’s cross is the devil’s mouse trap.

This is sometimes translated fly-trap, but it’s probably more precise to call it a “baited trap,” or a trap baited with flies.

Let no one, therefore, deceive you, when you are perhaps annoyed at flies. For some have been scoffed at by the devil and caught with flies. Fowlers, as you know, are accustomed to put flies on snares to deceive hungry birds; so, too, these men have been deceived by the devil with flies.(1)

The connection between evil and flies gives this added resonance. The Philistine deity Ba’al Zəbûb is literally “lord of the flies.” The New Testament refers to Beelzebul as the Prince of Demons.

The Devil exulted when Christ died, and by that very death of Christ the Devil was overcome: he took food, as it were, from a trap. He gloated over the death as if he were appointed a deputy of death; that in which he rejoiced became a prison for him. The cross of the Lord became a trap for the Devil; the death of the Lord was the food by which he was ensnared. And behold, our Lord Jesus Christ rose again. Where is the death which hung upon the cross? Where is the reviling of the Jews? Where is the pride and haughtiness of those who shook their heads before the cross saying: ‘If he is the Son of God let him come down from the cross.’ But He did more than they demanded in their revilings, for it is greater to rise from the tomb than to come down from the cross. (2)

This is a catechism in images, and there’s a lot more to unpack. Its most striking feature is the way it draws Joseph into the story as an active, rather than passive, figure in our salvation. Joseph is the craftsman making the trap Jesus will use to snare the devil.