Incorruptibility is a tricky subject. The preservation or decay of human remains can be affected by numerous factors ranging from preparation of the body to environmental conditions and beyond. St. Margaret of Cortona, once counted among the incorruptibles, was subsequently shown to be mummified at the time of interment. Others are not so easy to explain.

St. Bernadette Soubirous, the visionary of Lourdes, died in 1879 and was exhumed in 1909 and again in 1919 and 1925. Called the “identification of the body,” the exhumation comes at the end of the investigation into the cause for canonization. It’s a formal process involving sworn testimony by civil and religious authorities. At this time, the body is identified, checked for signs of decay, and relics are collected.

The first examination of Bernadette began at 8:30am on Wednesday, September 22, 1909. Masons lifted the stone while the mayor and deputy mayor looked on to certify the process. The coffin was placed on trestles and unscrewed, and the lead lining was cut open. Witnesses testified there was no smell, and the body within was in a highly unusual state of preservation.

A document kept in the convent of Saint-Gildard at Nevers, and signed by examining physicians “Drs. Ch. David and A. Jourdan,” states:

The coffin was opened in the presence of the Bishop of Nevers, the mayor of the town, his principal deputy, several canons and ourselves. We noticed no smell. The body was clothed in the habit of Bernadette’s order. The habit was damp. Only the face, hands and forearms were uncovered.

The head was tilted to the left. The face was dull white. The skin clung to the muscles and the muscles adhered to the bones. The eye sockets were covered by the eyelids. The brows were flat on the skin and stuck to the arches above the eyes. The lashes of the right eyelid were stuck to the skin. The nose was dilated and shrunken. The mouth was open slightly and it could be seen that the teeth were still in place. The hands, which were crossed on her breast, were perfectly preserved, as were the nails. The hands still held a rusting rosary. The veins on the forearms stood out.

Like the hands, the feet were wizened and the toenails were still intact (one of them was torn off when the corpse was washed). When the habits had been removed and the veil lifted from the head, the whole of the shriveled body could be seen, rigid and taut in every limb. It was found that the hair, which had been cut short, was stuck to the head and still attached to the skull, that the ears were in a state of perfect preservation, that the left side of the body was slightly higher than the right from the hip up. The stomach had caved in and was taut like the rest of the body. It sounded like cardboard when struck. The left knee was not as large as the right. The ribs protruded as did the muscles in the limbs.

So rigid was the body that it could be rolled over and back for washing. The lower parts of the body had turned slightly black. This seems to have been the result of the carbon of which quite large quantities were found in the coffin.

In witness of which we have duly drawn up this present statement in which all is truthfully recorded.

The sisters who had prepared her body for burial 30 years earlier were present and noted that although her hand had shifted position, she looked as she did when they last saw her. One notable change was the rosary, which had rusted while the flesh holding it remained supple.

There is a mistaken notion that for a body to be considered incorruptible it has to be in an ideal state, as if the person had just passed away moments before. This is not the case. Lorenzo Lambertini, the future Pope Benedict XIV, wrote a multivolume examination of the canonization process (Doctrina de servorum dei beatificatione et beatorum canonizatione) that included two chapters on “de cadaverum incorruptione.” These chapters continue to influence how the church defines and approaches the phenomena.

To be considered extraordinary a body has to be in an unusually well-preserved state, with lifelike color and freshness, lack of oder or signs of normal putrefaction, and some degree of flexibility in skin, joints, or both. It has to be in this state without any human intervention or other obvious cause. People who are found intact but begin to decay rapidly after being examined or moved could not be deemed miraculously preserved.

In the case of St. Bernadette, the high state of preservation at the first exhumation, coupled with the dampness of the clothing and decay of the rosary, was certainly remarkable. 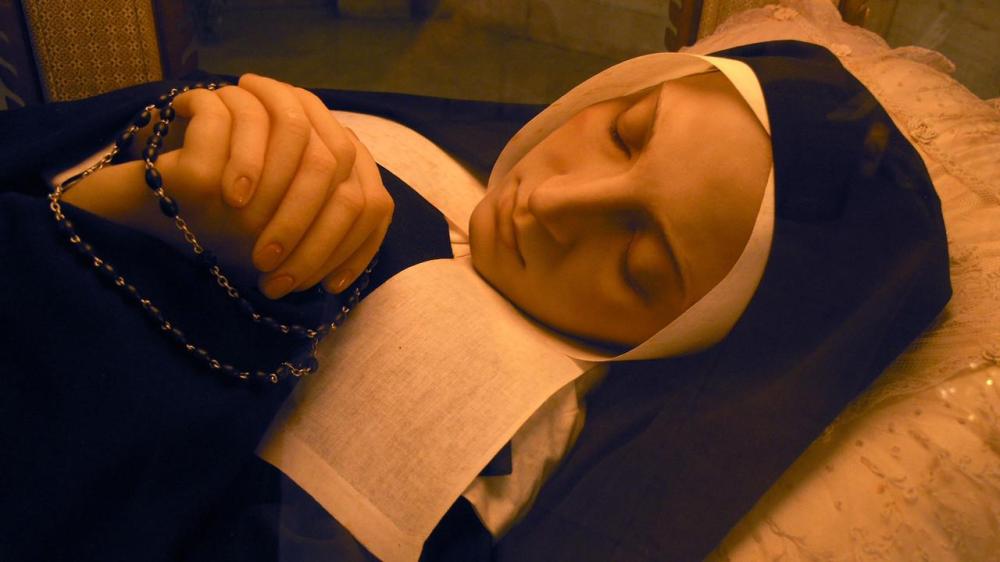 A body once considered incorruptible may, much later, show signs of change such as dryness or darkening. This was the case with St. Bernadette when she was exhumed again in 1919.

In 1909, Bernadette had been washed by the sisters and reclothed prior to being reburied. At the second exhumation her skin was discolored, probably from this handling during the 1909 exhumation. Once again, two doctors (Talon and Comte) were present for the exhumation and noted the lack of odor, some patches of mildew, and a drying of the skin. Dr. Comte’s report, dated April 3, 1919 and also kept at Nevers, states:

At the request of the Bishop of Nevers I detached and removed the rear section of the fifth and sixth right ribs as relics; I noted that there was a resistant, hard mass in the thorax, which was the liver covered by the diaphragm. I also took a piece of the diaphragm and the liver beneath it as relics, and can affirm that this organ was in a remarkable state of preservation. I also removed the two patella bones to which the skin clung and which were covered with more clinging calcium matter. Finally, I removed the muscle fragments right and left from the outsides of the thighs. These muscles were also in a very good state of preservation and did not seem to have putrefied at all.”

From this examination I conclude that the body of the Venerable Bernadette is intact, the skeleton is complete, the muscles have atrophied, but are well preserved; only the skin, which has shriveled, seems to have suffered from the effects of the damp in the coffin. It has taken on a grayish tinge and is covered with patches of mildew and quite a large number of crystals and calcium salts, but the body does not seem to have putrefied, nor has any decomposition of the cadaver set in, although this would be expected and normal after such a long period in a vault hollowed out of the earth.

At this point, St. Bernadette was reinterred, only to be removed one final time in 1925 for translation to her new resting place. The discoloration of her face was noted as well as the thinning of her nose. Since she was to be placed in a glass coffin in the Chapel of St. Bernadette in Nevers, casts were made of her face and hands, which were covered with wax. Dr. Comte was once again present, and left a report in Bulletin de I’Association medicale de Notre-Dame de Lourdes (1928):

I would have liked to open the left side of the thorax to take the ribs as relics and then remove the heart which I am certain must have survived. However, as the trunk was slightly supported on the left arm, it would have been rather difficult to try and get at the heart without doing too much noticeable damage. As the Mother Superior had expressed a desire for the Saint’s heart to be kept together with the whole body, and as Monsignor the Bishop did not insist, I gave up the idea of opening the left-hand side of the thorax and contented myself with removing the two right ribs which were more accessible.

What struck me during this examination, of course, was the state of perfect preservation of the skeleton, the fibrous tissues of the muscles (still supple and firm), of the ligaments, and of the skin, and above all the totally unexpected state of the liver after 46 years. One would have thought that this organ, which is basically soft and inclined to crumble, would have decomposed very rapidly or would have hardened to a chalky consistency. Yet, when it was cut it was soft and almost normal in consistency. I pointed this out to those present, remarking that this did not seem to be a natural phenomenon.

Could there be some natural explanation? Of course, which is why the church no longer uses incorruptibility as a miracle for the canonization process. Natural mummification and atypical preservation is absolutely possible under certain conditions. Cool graves can suppress the growth of bacteria. Artificial methods of preservation may be forgotten, as was the case with Margaret of Cortona. None of that, however, seems to apply to Bernadette, given the close examinations, damp conditions, and normal decomposition observed of other sister buried in the same place. And, of course, a natural explanation wouldn’t make it any less marvelous.

The other question is: why? Is there a theological explanation for this?

There are several possibilities. Naturally, we begin with scripture. In Psalm 16, God says He will not let his holy one see decay.

If the corruption of flesh is the cost of the Fall, then it’s intimately entwined with human sin. Perhaps someone who lives a holy and sinless life may be differently subject to this corruption. God may allow some evidence of this difference to inspire us.

The witness of sanctity is another important consideration. Bodies are exhumed and examined after a cause for canonization is already well underway. Preservation at the time of exhumation may be meant to show the postulators for the cause that they’re on the right track. Incorruptibility is rarely primary evidence in a case for canonization, but, like desert, it’s a nice added extra. St. Andrew Bobola’s extraordinary preservation was, after much debate in the 18th and the 19th centuries, accepted as a miracle that contributed to his canonization in 1938.

Of her last suffering, Bernadette said “all this is good for heaven.” Her life and her death points the way and inspires. If someone looks at that strangely serene face, even under its layer of wax, and feels moved to holiness, then the miracle has a purpose.

Faith doesn’t stand or fall on incorruptible saints. It’s something extra. Something wonderful, and wonder is a beautiful thing.