I had just wrapped up a radio interview with Jen Fulwiler with a discussion of relics when my wife texted me this:

I keep track of wandering relics on tour the way Deadheads used to followed Jerry Garcia, so I was surprised to miss this one in my own diocese. It was an hour away, though, and I hadn’t planned on spending the rest of the day and evening out. I was tired. I was busy. I was hungry. I wasn’t wearing pants.

Then it struck me: October 10th would have been my father’s 96th birthday. And his name was Anthony.

There is such a thing as a meaningful coincidence. Carl Jung termed it synchronicity, and though he struggled not only to explain but even to define it, he characterized it as “a falling together in time, a kind of simultaneity.” Everything is caused, of course, except for the Uncaused.  For Jung, synchronicity was “a hypothetical factor equal in rank to causality as a principle of explanation,” which doesn’t actually make sense. Still, it’s a useful word.

I didn’t need Jungian language, though. The radio show, the reminder from my wife, the relics, nearby, on this date, when I had been thinking about my father–these were my nudge from God. I was supposed to put aside the stress and worry that plague me and spend an hour with a good holy man, followed by mass with my bishop.

I was also there to witness the draw saints continue to exert on the faithful. When I went to venerate St. Maria Goretti, I expected to find an honor guard of Knights and a dozen old ladies saying the rosary. I was floored to find thousands had shown up and the line stretched out of the church, with long lines inside for confession. That was my first real experience of popular relic veneration, and it all clicked into place: people were drawn, and once there they prayed, they partook of the sacraments, they wept, they reached to something beyond themselves. This is the genius of the Church, and it’s why the saints are such a treasure. They draw us in.

Saints are not the way. Saints point the way. That’s what happens with veneration of relics. They are a point of contact. This flesh, these bones: they are sanctified. Touched by God, they will surely be reknit together and arise to glory on the last day.

And so I sat in the Church and watched as the people knelt, prayed, touched their rosaries and holy cards to the reliquary, blessed themselves. The crowds were less dense than they were for St. Maria, but that’s not unexpected. St. Anthony is an everyday saint. We’re used to him. Frustrated Catholics have been muttering “Dear St. Anthony, please come around. Something is lost and it can’t be found” for centuries. There’s a plaster quality about him from too many statues and too close a familiarity.

The flesh and blood saint was no man of plaster. He was a brilliant teacher who impressed St. Francis so much he was given the task of teaching the friars, even though Francis was skeptical of theology because it tended to lead men away from service to the poor. Pope Benedict said of him:

With his outstanding gifts of intelligence, balance, apostolic zeal and, primarily, mystic fervour, Anthony contributed significantly to the development of Franciscan spirituality.

Anthony himself was inspired to join the Franciscans following the veneration of relics. The first five Franciscans sent to Morocco had been returned beheaded. This enflamed him with the desire to follow their path, and although illness prevented him from reaching Morocco, he found his vocation with this strange new order and its charismatic leader.

In his new role he would lay the foundations for Franciscan theology that would later flourish with Bonaventure. After hearing him speak, Pope Gregory IX called Anthony the “Ark of the Testament” for the way his words carried the message of scripture like a jeweled box. His canonization followed less than a year after his early death at the age 35: one of the fastest canonizations in history.

That St. Anthony seems largely forgotten today. His sermons are not readily available in English, and despite being named a Doctor of the Church he receives relatively little attention for his work. It’s the story of the lost breviary–stolen by a fleeing novice and returned (along with the novice) after Anthony’s prayers–that we remember, along with a bit of doggerel prayer while we’re looking for our mislaid keys.

And as I sat thinking about all this in a church in New Jersey, there was a bit of the man himself a few feet away, and I felt closer to him. I also felt the presence of my father, now gone five years and named after him.

I have relics of my father, too. No, not his remains. That would be gross and probably illegal, and since he’s not a saint assured of resurrection it would also be inappropriate. I have a photo of him in uniform from the war. I have his high school swimming medal. I have his fire helmet. I have furniture he made.

I don’t think of him enough, but as I sat with these two Anthonys–one a saint of undoubted holiness, the other a simple sinner and son of the church–I felt closer to all the living and dead who weave us together into this wonderful, mysterious communion of saints. And that’s why we do this. 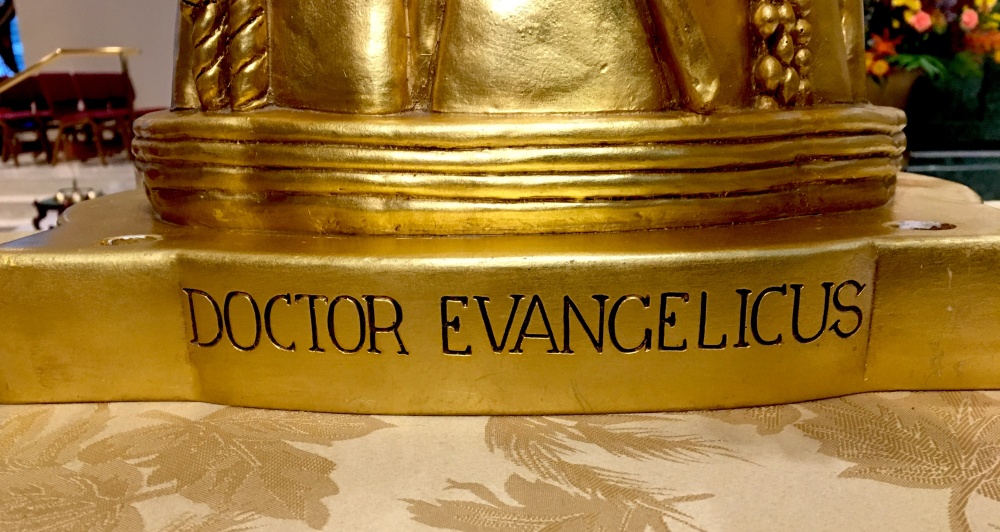