First of all: St. Christopher is still a saint. His feast day of July 25th was dropped as part of the revisions to the universal calendar in compliance with Mysterii Paschalis in 1970 because so little was known about him and many other early saints. He wasn’t, however, unsainted, and devotions are perfectly acceptable and remain popular, and local churches are free to recognize the traditional feast day. It’s simply a matter of no longer being on the universal calendar.

A more interesting question is: did he have a dog’s head?

This seems unlikely given, you know, basic biology, but let’s investigate.

The Legend of Christopher

Christopher died in either the 3rd or 4th century depending upon whether it was the emperor Decius and Dacian who ordered the persecutions. The legends of Christopher are all rather late, and popular devotion didn’t really emerge until the middle ages. Remember, early martyrologies were often merely lists of names, and the pious had to fill in the rest the best they could. Sometimes there were stories handed down, and even written accounts as with Perpetua and Felicity, but often a saint might just attract legends the way polyester attracts lint. Perhaps it’s in the name. Thus, Felix is faithful. And Christopher becomes a Christ-bearer.

According to medieval Latin narratives, with Jacobus de Voragine in the Golden Legend being the most vivid, Christopher was giant named Reprobus (meaning “outcast”) from Canaan. Standing over seven feet tall (twelve feet tall according the Jacobus), he was in the service of a Canaanite king, swearing only to serve the most powerful man in the land.

One day he saw the king make sign of the cross every time a jester mentioned the devil. Deciding this meant the devil was more powerful, and went in search of him. He came across a host of soldiers, one of whom was more terrible than the others. When this man asked Christopher what he sought, he answered, “I seek to serve the devil as my master.” The soldier claimed to be the devil, and Christopher gladly entered his service.

As they were traveling down a road they came upon a wayside cross, and the demon was so struck with terror that he took a long detour to avoid it. Christopher demanded to know why, and the demon told him about Christ and how His sign filled him with fear.

So Christopher went in search of Christ, and finally found a hermit who preached the faith to him. The hermit suggested various mortification and prayers to Christopher as part of his new faith, but the giant rejected them all. Finally, they agreed that he would set up a hut by a river where many travelers perished attempting to cross. With a pole, his huge size, and his strength, he would be able to guide wayfarers safely across, and this would be his service to Christ.

One day, while in his hut, he heard the voice of a child calling to him, “Christopher, come out and carry me across.” He lifted the boy onto his shoulders, but as he got part way into the river, the child grew unbearably heavy, almost crushing and dragging him under the water. Only with great effort did he finally make it across.

Weary and surprised, he said to the child, “You put me in great danger. It was as though I had the weight of the whole world on my shoulders.”

The child replied, “Do not be surprised, for not only did you carry the whole world, but He who created it. I am Christ your king, who you serve, and if you want proof, plant your staff in the ground by your hut and it will leaf and bear fruit.” With that, the child vanished, and Christopher did as he was told. The next morning, the staff bore leaves and fruit like a palm.

After his encounter with the Lord, Christopher went to Samos, a city in Lycia, where Christians were being persecuted. He planted his staff again, and again it fruited, and thousands were converted by the miracle. The king, however, was enraged, and sent soldiers to collect him. These, too, he converted, but he went to the king anyway. When Christopher refused to sacrifice to the king’s gods, he was imprisoned. Two women—Nicaea and Aquilina—were sent to tempt him away from his faith, but these he converted. They returned to the king and used their girdles to pull down his idols, whereupon they were killed.

Christopher was brought before the king to be tortured. An iron helmet was heated and placed on his head, and he was chained to an iron chair and placed in the flames. Nothing happened and the chair collapsed. Next, four hundred bowmen were ordered to fire upon him, but their arrows merely hung in the air and none so much as scratched him. One, however, spun in midair and returned to strike the king, putting out his eye.

“Tyrant,” Christopher said, “I will be dead by tomorrow. Then make a paste with my blood and rub it on your eyes, and you will recover you sight.” 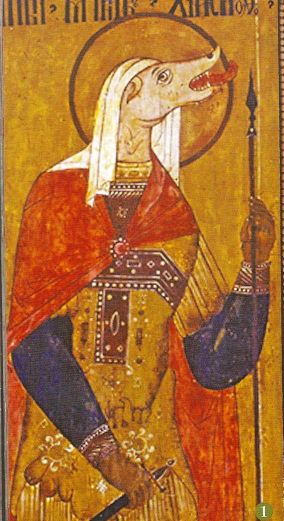 The next day, Christopher was beheaded. The king placed his blood in his eye and prayed to the God of St. Christopher. He was healed immediately, and then baptized, ordering that anyone who blasphemed the God of Christopher should be beheaded, which probably wasn’t the lesson he was supposed to learn, but … baby steps.

Much of this has the form and flavor of certain kinds of medieval hagiography meant for didactic purposes rather than any attempt at real biography. There’s no indication of any continual tradition about Christopher down the through the ages, which is why he lost his slot on the universal calendar. That doesn’t mean he didn’t exist. It just means the person of Christopher who emerged in a popular medieval cult has only a passing relation to an historical figure named Christopher who died a martyr’s death.

There’s been some attempt to connect him to St. Menas, with claims that they’re the same person revered under different names. This has to do with sources that say he was in the Third Valerian Cohort from Marmarica, located in North Africa, and that he was martyred in Antioch. Menas is the Coptic patron of travelers, which reinforces this theory. It’s possible that we’re seeing one person taking on two identities and multiple legends as he’s adapted for Coptic, Greek, and Latin traditions. If you follow this path away from the legendary material, there are all kinds of interesting byways, but I’m not convinced we’re even talking about the same Christopher at this point, nor do I see how you can craft a genuine biography of a 3rd century martyr using 14th century Ethiopic texts.

What’s peculiar is that in some eastern icons Christopher is depicted with the head of a dog. This is commonly attributed to a linguistic error. Christopher was a Canannite, which in Latin is Cananeus. Change one letter of the Latin and you get Canineus, or Caninite: Dog-men. Dog-headed men were described in some medieval travel texts, so it’s not so far fetched to thing the philological answer is the best one. There’s even a word for it: cynocephaly.

For example, in Historia gentis Langobardorum, Paul the Deacon writes:

“They pretend that they have in their camps Cynocephali, that is, men with dogs’ heads. They spread the rumor among the enemy that these men wage war obstinately, drink human blood and quaff their own gore if they cannot reach the foe.”

Note, however, that Paul doesn’t believe this.

“Angamanain is a very large Island. The people are without a king and are Idolaters, and no better than wild beasts. And I assure you all the men of this Island of Angamanain have heads like dogs, and teeth and eyes likewise; in fact, in the face they are all just like big mastiff dogs! They have a quantity of spices; but they are a most cruel generation, and eat everybody that they can catch, if not of their own race.”

Again, was he being literal or just making a point about their savagery?

Explanations that require the people of the middle ages to be morons get the Spock Eyebrow from me. I more inclined to think the similarity in Cananeus/Canineus led iconograpers to make a theologically meaningful visual pun.

Christopher was a brute willing to put himself in the service of the devil because he worshipped power, but in his encounter with the Lord he learned to truly serve Power in humility and faith. Isn’t that kind of like the loyalty of a dog? A beast, certainly, but a faithful beast. In other words, they did not literally believe a saint had the head of a dog. Rather, as with all icons, there’s a meaning to be uncovered in prayer and meditation. It’s not an illustration.

I’m not alone in this opinion. An Orthodox writer named Jonathan Pageau has written a lengthy reflection on the deeper meanings of these icons, with a focus on the monstrous as a way depicting the alien or foreign. I think the symbolism is probably more simple than this, but he unpacks a lot of interesting points along the way and it’s certainly worth a read.

Finally, some people say these images have to do the survival of worship of Anubis, the dog-headed Egyptian god. If you run across someone who makes this claim, go ahead and poke them in the eye for me.