In the medieval church, folk piety was rich in the theatrical and festive observation of Christ’s nativity. We see and hear a faint echo of it d 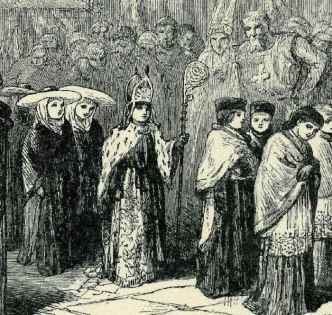 own to our own times in Christmas carols, pageants, living creches, and even quasi-religious pop entertainment like A Charlie Brown Christmas. Some tend to downplay the importance of the Christmas season in comparison to Lent and Easter in the early church, but that’s just not true. Christmas certainly went underground a bit during the Reformation, only to emerge again as a full-blooded time of celebration int he 19th century, but prior to the Reformation it was observed with great joy and feasting.

The notion of medieval life as wholly grim and joyless is absolutely false. For all their struggles and challenges, they were a people who loved celebrating. Indeed, the harsh nature of life made song, dance, games, story, and general feasting even more important. They took their leisure time seriously, and all of it was measured out and guided by the life of faith and the liturgical calendar.

And a Little Child Shall Lead Them

One of the stranger corners of medieval celebration was the installation of the Boy Bishop. The practice is often blended with the much-condemned Feast of Fools, and indeed there was overlap between the two. The Feast of Fools had different start days in different places, but traditionally began on the Feast of the Circumcision (January 1st). It was a time of disorder. Some historians attempt to trace it back to the upending of social conventions and role-switching during the Roman festival of Saturnalia. It’s possible we see in the Feast of Fools a dimly recalled folk memory of such a practice, and just as possible that it merely speaks to a natural human need for role reversal that echoes down to the 20th century in traditions like Sadie Hawkins Day. It may have functioned as a pressure valve for a hierarchical social order in which everyone had a role to play among the estates of man. It also had solid scriptural grounding in Matthew 20:26: “the first shall be last and the last shall be first.”

In Rome, master and slave would have exchanged roles. In medieval Europe, lower and upper classes did, as might children and adults, men and women, and so on. What started out as a rather harmless exercise is bawdy fun soon degenerated into license, disorder, and blasphemy. It’s hard to say to just how bad the Feast of Fools got since we only have reports by those who preached against, and ultimately banned, it, but there’s a sense of “Palm Beach at Spring Break” excess that certainly crossed a line. E.K. Chambers, in his seminal study The Medieval Stage, says that many of the “ludi” (technically “games,” but in this sense more like “japes”) “amounted to mockery of the divine worship, did much damage to the church vestments, and brought the clergy into disrepute.” It was repressed harshly both before and after the Reformation, but especially after. Ultimately, all of these examples of folk piety was banned in England by Henry VIII, came back under Mary I, and were finally erased under the iron fist of Elizabeth I.

The festival of the Boy Bishop had a fate entwined with the Feast of Fools. It was a period of about three weeks in which a child, usually from the choir, was chosen, or perhaps elected by his fellow choristers, to be bishop. It began on the feast of St. Nicholas (December 6th) and ended on the feast of the Holy Innocents (December 28th): two days associated with childhood.

He Has Lifted up the Lowly

Chambers cites the Officium Infantum of Rouen, France as one thorough example of the standard protocols. At Vespers (probably on December 5th), the boys processed from the vestry to the altar of the Holy Innocents, then the boy bishop gave the blessing. The next day the baculus was exchanged during the Magnificat. The real bishop stepped down while “deposuit potentes” (“He has put down the down from their thrones”) was sung, while the boy took his seat during “exaltavit humiles” (“and he has lifted up the lowly”). Other regions had the boys process to the altar of St. Nicholas not that of the Holy Innocents, but the basic form is the same. Following the disposition, the real bishop serves as “chaplain” to the boy. After compline, he is processed home in full pontificals, and at mass each day he censes and is in turn censed.

The Rouen text provides very precise actions for the Boy Bishop. He wears a silk tunic, cope, and mitre. He does not have the ring, but he does have the crozier or baculus. (The distinction between these two words has blurred over time and they are now mostly interchangeable. Although in common usage baculus suggests the lack of a crook, some older sources suggest the exact opposite. Some people will argue passionately about the distinction. It’s best to avoid those who do.) The boys who accompany this wee “bishop” must behave as they would with the real bishop. The boy takes the chair of the bishop and performs the duty of a priest, with the except of the mass and other sacraments. He preaches a homily, pronounces benedictions, and leads the church (with assistance from adults) for his period in office.

The festival was degraded over time as it blended with the more boisterous, and often blasphemous, Feast of Fools. The rites laid down for the various actions were bastardized and what dignity the church managed to impart to this curious custom was lost. Mimes and actors and musicians were added, and the boys might have gone about masked in some regions and gotten up to the kind of shenanigans boys get up to.

Some of the lavish trappings and meals were paid for by the canon out of fines, but sometimes the participants used their newfound authority to demand money from passers-by and tavern patrons. There’s a record of one curious ritual in which the canon paid homage to the “bishop,” apologized for anything lacking in the feast, and presented a cap adorned with rosemary and other flowers or herbs. The “bishop” would then present this cap to the canon who would handle things the following year. If the boys found the canon’s actions lacking in any way, they were permitted to hang a black cope on a candlestick in the middle of the choir for as long as they wanted.

If the customs of the medieval folk seem strange to us today, consider what getting choked up at a cartoon child with a blue security blanket reciting the Gospel of Luke would look like to them. (Oh come on, you know you do.) We have to imagine it as a time of lighthearted fun given form by the Church. This interplay between folk piety and the official work of the Church is a defining characteristic of Catholicism, and although I doubt we’ll ever see a return to Boy Bishops, we should remember it.