I have no idea what’s up here.

Here’s the entire page, which is an illumination from an MS of the Commentary on the Apocalypse by Beatus.

And the facing page: 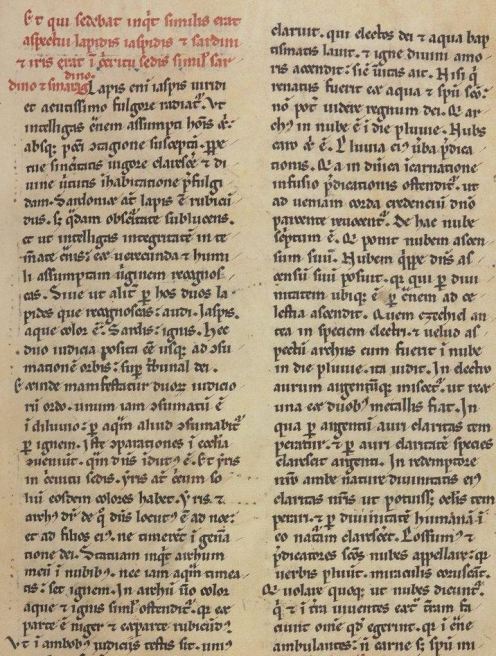 It’s a commentary on Revelation 4:3, with the red text at the top reading:

And he that sat, was to the sight like the jasper and the sardine stone; and there was a rainbow round about the throne, in sight like unto an emerald.

I think the art depicts the “four and twenty seats” of Revelation 4:4, showing the “ancients” not the apostles as I first thought, although they’re not quite “clothed in white garments.”

But why do their seats have propellers? Or windmills? Or crosses? Or whatever they are?

And, why sixteen floating/decapitated heads?

The folks at the incredible British Library Medieval Manuscript blog tweeted to say these are chairs and draw my attention to an illumination of the same passage in their own collection: The Silos Apocalypse. Here’s a detail from it: 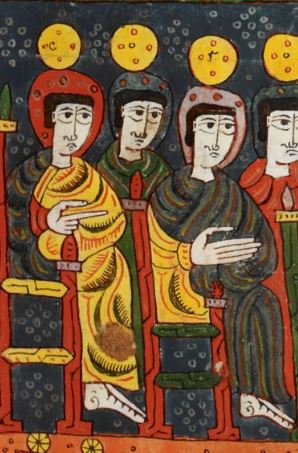 Those chairs are sadly propellerless.

SOLVED-ISH: It’s possible that what appear to be propellers are merely X-shaped supports for some kind of bench or camp stool.

UPDATE: Twitterer Graowf did the digging and solved the mystery with a link to a guy who’s “really into chairs“:

The sella curulis was a seat of authority, for army commanders and state rulers. This remained so throughout the Middle Ages: miniatures in medieval manuscripts show kings and abbots seated on a folding chair. Often these are adorned with draperies and cushions, and equipped with a foot stool. Even Lucifer (the ‘authority’ of Hell) had its own ‘living’ folding chair.